Are you at the end of the line?

“Remember what Amalek did to you on the way as you were coming out of Egypt, how he met you on the way and attacked your rear ranks, all the stragglers at your rear, when you were tired and weary, and he did not fear God.” Deuteronomy 25:17-18

To me this is a beautiful picture of the heart of God. He is concerned about those at the end of the line. He is a defender of the tired and weary, the straggler who cannot keep up.

It reminds me of Jacob, when he and his estranged brother Esau met and reconciled. Esau encouraged His brother to journey on with him, but Jacob was concerned about the weak.

“But Jacob said to him, ‘My lord knows that the children are weak, and the flocks and herds which are nursing are with me. And if the men should drive them hard one day, all the flock will die.'” – Genesis 33:13

God’s eye is always to have mercy on the weak, those who cannot make it on their own. Too often my attitude has been one of judgment. “They should try harder, work more, be more responsible.” Really, my judgmental attitude is nothing more than an excuse to ignore them, to not be bothered. 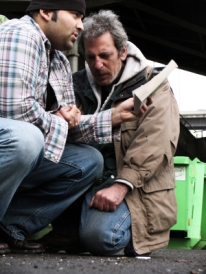 Taking care of the weak is hard and messy. Often it doesn’t end in with a tidy conclusion like a television sit-com.  In many cases, there is a reason they are in a bad situation, and getting down in the pit with them is no fun.

Jesus is at the back of the line. Maybe it’s time I stop trying to be in front.

This post is also being featured today on the Compassion International blog.  You can read it here, plus check out other encouragements to take care of the poor.  While you’re at it, why not put this post into practice and sponsor a child. It’s your chance to care for “the least of these.”  My wife and I sponsor three Compassion children and know first-hand the difference your love and support will make in the life of a child.

This entry was posted on March 11, 2011, 7:00 AM and is filed under Uncategorized. You can follow any responses to this entry through RSS 2.0. You can leave a response, or trackback from your own site.