We had better think twice

The only thing that made Jesus angry was religion.  More specifically, empty religion practiced by those who thought their adherence made them better than everyone else.  A religion that took great pride in its moral code.  A religion that made Him guilty of sin by His association with those who didn’t keep the moral code.  He called the Pharisees, “whitewashed tombs which indeed appear beautiful outwardly, but inside are full of dead men’s bones and all uncleanness. Even so you also outwardly appear righteous to men, but inside you are full of hypocrisy and lawlessness.”  Those are strong words.  Check out Matthew 23 for a few more choice words.

The only thing that made Jesus violent was the corruption of the temple of God by greed and gain, by buying and selling in the place reserved for worship and reverence.  He saw how they profited from those who were simply trying to worship God, and it angered Him to the point of physical force. By His actions, Jesus showed how seriously God takes those who would take advantage of the poor and vulnerable in the name of service to Him.

How must He feel about what He sees in His temple today?  We have turned the church of Jesus Christ into a program to marketed, a product to be sold, a religion to be practiced.

Our world is full of those who have turned away from God Himself because of our exclusivity and judgment. How angry must He be at the pride of our religion and the arrogance of those who keep the rules, thinking themselves better than everyone else?  We have created a religion in the name of the One who came to loose us from the bonds of religious obligation and give us direct access to the Father. 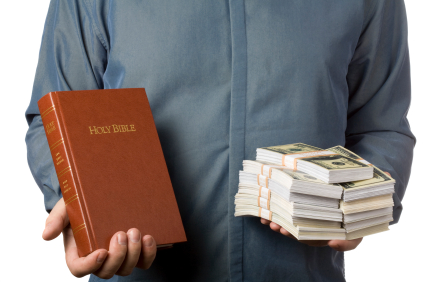 How must His righteous indignation rise at the corruption of His body through buying and selling?  How must He feel when we neglect the poor and needy He came to serve, yet build monumental buildings in His name?  How angry must He be when we threaten a single mom with a curse if she doesn’t tithe, then then use that money to pay her pastor a six-figure salary?  How must He feel when we trade His name like a product?  I wonder, does it make Him weep to see our tacky bookstores full of items like the Jesus Pez Dispenser and “Testamints”?

He overturned the tables of the moneychangers.  He fashioned a whip and attacked those who bought and sold in the name of God.  He exhibited his anger at those who took advantage of the common man in the name of worship.  And we think ourselves immune to that anger?

This entry was posted on June 14, 2011, 7:00 AM and is filed under Challenge. You can follow any responses to this entry through RSS 2.0. You can leave a response, or trackback from your own site.