A chip off the old block 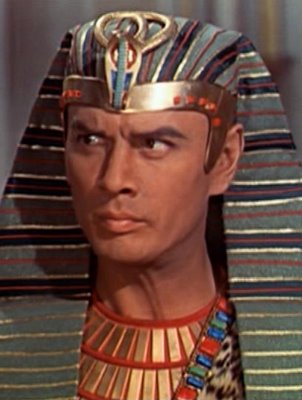 Have you ever wondered what Pharaoh was thinking?  How could he not have gotten a clue?  If I were Pharaoh, I would have given in after the first two or three plagues.  I never would have made it through the lice, let alone fiery hail falling from the sky.  How could he have stubbornly held on so long and lost so much?  Even Pharaoh’s own advisors came to him and urged him to let the Israelites leave.  “Our whole country is destroyed,” they pleaded.

I’m thinking there’s a little Pharaoh in all of us.

How many times have I clung to that which God has told me to release?  How much pain and suffering must I bear until I am ready to let go?  I stubbornly hold on to those secret sins.  I refuse to let go of the fears that have held me back.  I run in the other direction from His call when it threatens my status quo.  He tells me to take care of the poor, yet I spend far too much on myself.  He tells me to be holy just like Him, yet I keep messing around with the world.  He tells me to walk by faith, yet I continue to hold on to my security for dear life.

I don’t want to be like Pharaoh.  I don’t want to foolishly hold on at the expense of my own destruction.  I want to let go and become who God wants me to be.  Sure, releasing those things to which I have clung so tightly is scary.  Giving up my preconceptions, my comfort zone and my convenient excuses requires dying to myself, and death is frightening.  But it’s something I must do if I’m going to be obedient to God and really follow Him.

Some might think God’s grace releases me from this responsibility.  I believe His grace is what makes it possible.

This entry was posted on June 21, 2011, 7:00 AM and is filed under Challenge, Encouragement. You can follow any responses to this entry through RSS 2.0. You can leave a response, or trackback from your own site.