Which One Are You?

Taken as a whole, the teachings of Jesus are the most subversive, radical, counter-intuitive philosophy ever thrust upon the human condition.  The statement “Love your enemies” alone could inspire many volumes as we seek to apply its weight and gravity to all areas of life and civic interaction.

I think it’s the most radical story ever told.  If you don’t know the story, read it here.

Most interesting to me is Jesus’ choice of characters.  There’s the Priest and Levite, men known for their strict adherence to religious rule and ritual.  Men who would have had more than sufficient means to take care of the injured man.  Men who, had they understood the teachings of which they so proudly considered themselves experts, would have been compelled to stop.  But they didn’t.

No explanation of why, no mention of prior engagements or work that was more important.  They simply didn’t stop  But Jesus took it one step further.  Not only did they not stop, but they passed by on the other side of the road.  They altered their path so as to avoid the suffering of the wounded man.  They went out of their way to ignore him.  It’s not simply that they didn’t stop, but that they knew they should stop and didn’t.

Then there’s the Samaritan.

That word “Samaritan” just doesn’t carry the emotional weight for us that it carried for those who heard it from Jesus’ lips.  I don’t think Jesus could have chosen a more controversial protagonist for His story than a Samaritan.  To say these people were hated would be a gross understatement.

There was a racial and religious hatred centuries old between the Jews and Samaritans, dating back to the Assyrian occupation of Israel during the 8th century BC. When the Assyrians conquered Israel, they settled conquered peoples from other lands in Samaria, Israel’s capitol.  These pagans over the years intermarried with the native Jews left in Samaria, creating a race of what the Jews considered to be “half-breeds.”  The hatred and antagonism was present when Nehemiah was rebuilding the walls of Jerusalem following the Babylonian captivity.  In fact, just thirty or so years prior to Jesus telling this story, Samaritans had entered the temple in Jerusalem during Passover and desecrated it by spreading human bones in the porches.

Jews hated Samaritans.  They were racially impure, their food was considered as unclean as swine flesh, their religion was illegitimate. In fact, when the Pharisees could think of no greater insult to hurl at Jesus, they called Him a Samaritan.  Even Jesus’ own followers couldn’t believe He was talking to the Samaritan “woman at the well.”

And so Jesus chose a Samaritan to stop and help the wounded man.  A Samaritan showed compassion on a Jew.  A Samaritan did what the “righteous” priest and Levite would not: he stopped and helped. He treated the man’s wounds, took him to a local inn and provided for his care and recovery.  He promised to return and make sure the man had recovered and the bill was paid.  He didn’t just stop and help, he committed himself to a man who hated him.

Jesus could have chosen anyone.  It was His story.  He could have made the man a fisherman, a commoner, even a leper.  But He chose a Samaritan.

His meaning couldn’t be any clearer. 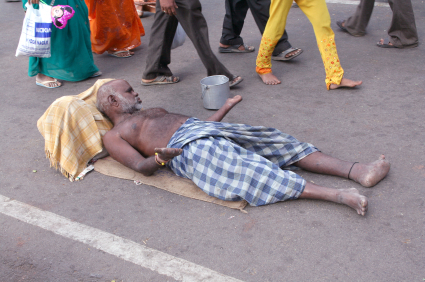 Jesus is clear in His teaching, and the essence of that teaching boils down to one word: love.  And the outcast “sinner” who loves is, according to this parable, more a part of the Kingdom than those who appear to keep all the rules except one: to love.

Everything is upside down in the Kingdom.  The last become first.  The poor become preferred.  The rejects get moved to the front of the line.  The sinner who deserves death gets life.  And the “Samaritan” who stops and helps is better than the “Priest” who doesn’t.

Which one are you?

This entry was posted on November 29, 2011, 6:00 AM and is filed under Challenge, Commentary. You can follow any responses to this entry through RSS 2.0. You can leave a response, or trackback from your own site.