My way or the highway

Posted by Dave Kirby in Challenge, Commentary on July 7, 2011

Have you ever noticed how the church talks about the concept of “absolute truth?”  For the most part, we use that term as a weapon.  We wield it like a giant 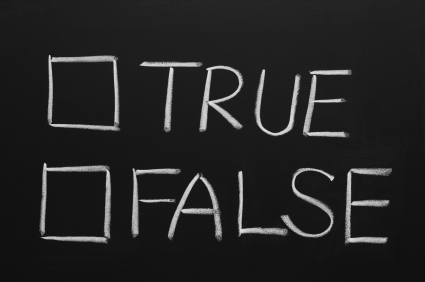 spiritual baseball bat to bludgeon anyone who does not agree with us.  If you think differently than what our doctrine clearly states, you are wrong.  And we wast no time or effort in quickly convincing you of that fact.

The funny thing is, I always think of what I believe as absolute truth, not what you believe.

I never stop to consider that those who disagree with me feel as strongly about the “absoluteness” of their truth as I do of mine.  So we let something that should unite us divide us instead.  Instead of rallying around what should be obvious to all, we instead polarize, demonize, and politicize.

It seems we Christians love to look backwards.  We look at the way things have always been done and elevate our traditions to the level of absolute.  Then when anyone dares disagree with us, they become an enemy who must be silenced.  Our truth is better than yours, so we protect ours by eliminating yours.

Why do we have to proclaim truth in such a negative way?

The good news seems more like bad news when it makes you right and me wrong all the time.

In John 14:6 Jesus proclaimed Himself to be the “…way, the TRUTH, and the life…”  So, as His follower, my definition of truth must begin and end with Jesus.  His words, His actions, His example gives me a road-map to follow in my pursuit of truth.  If it looks and sounds like Jesus, then it is truth.

Jesus certainly didn’t beat people over the head with doctrine or dogma.  He didn’t use the truth of who He was as a weapon against the infidels.  The Pharisees did that.  They were the ones excluding and judging, condemning and executing.  They were the ones enforcing every letter of the law, while forgetting mercy.  The Pharisee’s concept of absolute truth said the woman caught in adultery should be stoned.  But Jesus – the truth in human form – said, “neither do I condemn you.”

I believe that love overcomes evil.
I believe that mercy triumphs over judgment.
I believe we will be judged by how we treat the poor, the oppressed, and the helpless.
I believe “love your neighbor” transcends race, creed, nationality, and bigotry.
I believe loving our enemies is better than hating them.
I believe in returning good for evil, love for hatred, mercy for wrongdoing.
I believe we are never so tall as when we stoop to embrace a leper.

Yes, I believe in absolute truth.

I believe we are all absolutely depraved, and that Jesus came to absolutely redeem all of us to Himself.  And I absolutely don’t get to decide what that looks like.  He is the Redeemer, He gets to decide.  He has redeemed even people I might not like, agree with, or understand.  He is more than capable of revealing the truth of His love to the world He came to redeem.  He doesn’t need me to swing Him around like a blunt object used to beat sinners into submission.

Besides, love is a much more effective weapon anyway, and that’s the truth.