There can be no argument that things are changing around us. There is a societal shift happening that rivals some of the greatest cultural revolutions in history, as big as the invention of the printing press or the industrial revolution.

In America, we are in the midst of a transition to a post-industrial society. We no longer live in an assembly line world where the powerful few are in charge, while the masses show up, shut up, and do as they are told. Today’s world is an outsourced, work from home, iPod, unlimited choice, internet-driven culture where the individual is more in charge of their own destiny than ever before.

It’s a scary and exciting time.

Christianity was never meant to be anything else. Think about it: Jesus showed up on the scene challenging the authority and criticizing the top-down leadership of His day. He condemned the powerful few who swayed the masses through control and domination.

Through His death, Jesus released us from the need for the spiritual middle-man. He gave us direct access to God Himself. In an instant Jesus created a spiritual climate very similar to what we see going on culturally right now.

Yet the entirety of church history has been one long story of men trying to re-establish that control in the name of God. Popes and pulpits, denominations and doctrines all designed to tell God’s people what to do and how to do it, what to think and how to think it.

And for most of history we have played along. We have allowed others to tell us what to believe and what to think. We’ve been content to show up and shut up because it’s more comfortable that way. It’s easier to get spoon fed than it is to do the work of seeking God for ourselves. 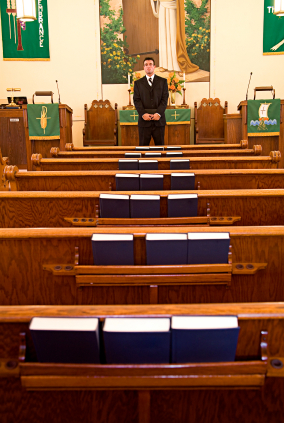 The world has changed, and as the church has failed to change with it we have become increasingly outdated and irrelevant. We are operating an old model in a new age. Factories are closing all around us, yet we are still operating church like it’s an assembly line. People are working from home or from Starbucks, yet we still want them to show up at a building at 9:00 on Sunday morning. We think they’re not interested in church, but the fact is they’re just tired of us trying to jam square pegs in round holes.

It’s time to let go of the control. It’s time to stop thinking of church as a top down institution, but rather a bottom up community. That’s the model taught by Jesus. Groups of believers coming together organically, directing their time and resources to doing the work of the kingdom instead of feeding the organizational beast. Yeah, not as many pastors earn salaries in the new model of church. When we all become the church, there might not be a need for a full time guy running the show.

Now is the time to win the battle once and for all. Christ’s coming was meant to be a radical shift in human consciousness. It’s a shift away from the control of the intermediaries between God and man. The curtain was torn. We are all face to face with the Father Himself.

If you have felt that something is not right, it’s for good reason. Things are not right. They are not even close to what God intended. I’m not suggesting that we change church to follow culture. I’m simply proposing that we get back to what it was intended to be all along.

It’s a shame it took 2,000 years and a cultural revolution to get us here.