Posted by Dave Kirby in Challenge on September 27, 2011 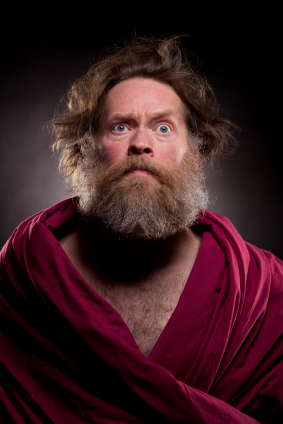 If there arises among you a prophet or a dreamer of dreams, and he gives you a sign or a wonder, and the sign or the wonder comes to pass, of which he spoke to you, saying, ‘Let us go after other gods’—which you have not known—‘and let us serve them,’ you shall not listen to the words of that prophet or that dreamer of dreams, for the LORD your God is testing you to know whether you love the LORD your God with all your heart and with all your soul.

Understand, this is not some normal, everyday person.  We are being warned about one who is considered a prophet, a man who performs miracles, someone able to work “signs and wonders.”  I think if some guy showed up and performed a miracle, most of us would believe that he must be speaking with God’s blessing.  I know if I saw some prophet work a supernatural sign, I would tend to believe what he says.

Yet this scripture tells us that even the one who works miracles is a false prophet if he entices us away from serving the Lord and obeying His commands.

We live in a pragmatic world.

The church today is often ruled by the mentality of “if it works, it must be right.”  Have thousands of people attending your church?  You must be on the right track.  Getting attention from the world around you?  You must be saying the right thing.  Getting the desired results?  You must be doing God’s work.

We have been told we can expect financial prosperity as though Jesus didn’t spend a great deal of His ministry warning those who are rich.  We have been told we can expect happiness and fulfillment, as though the gospel were some sort of self-help technique.  We have been told it’s okay to engage in the materialism around us when half the world’s population lives in poverty.  And because those who have told us these things are considered “Christian leaders” with successful ministries, we have believed them without question.

But no matter how good they sound, they are false prophets.

Scripture is full of stories of those who were called by God, yet suffered lack and defeat.   Prophets were murdered.  Even Jesus was forsaken by all but a few.  Modern day saints endure torture and persecution for the sake of Christ.  Others live in extreme poverty.  Others get sick and die.  Things do not always work out the way we want them to.  Christians are not always healthy, wealthy, and wise.

So how do we know who to believe?

How do we know who is truly speaking the words of God?  Here are 3 suggestions:

1. Get into God’s word for yourself.  Read and study and find out what God’s plan is.  When I started reading my Bible faithfully, I couldn’t believe how far modern Christianity is from what I saw in scripture.

2.  Pray.  Not just a little bit, either.  Pray a lot.  Put down your entertainment, lay aside the things that take up your time and attention and earnestly seek God.  Press through the ADD and wandering mind and get down to business with God.  He will speak to you, He wants to speak to you.  In the process you will find that you need the words of man less and less.

3.  Judge their words based on the truth of what you hear from God and read in His word.  Don’t just take the words of man at face value, even if that man (or woman) is a respected and well known Christian leader.